The game is known around the world as bowls, lawn bowls, or bowling on the green. The object of the game is to roll the bowls so that they will come to rest as close as possible to the target, which is a small white ball called the jack. Points, or shots as they are known in the game, are won by the side whose bowl or bowls are closer to the jack than any of those of the opposition.

The standard game is made up of a predetermined number of ends. An end consists of playing all the bowls of both players or teams in one direction on the rink. Subsequent ends are played in the opposite direction. The shots are recorded on a score card at the conclusion of each end and a cumulative total is kept.

The game is played by opponents taking turns rolling their bowls towards the jack. The decision of who plays first is determined by the toss of a coin. The winner of the toss can play first or allow his opponent to. 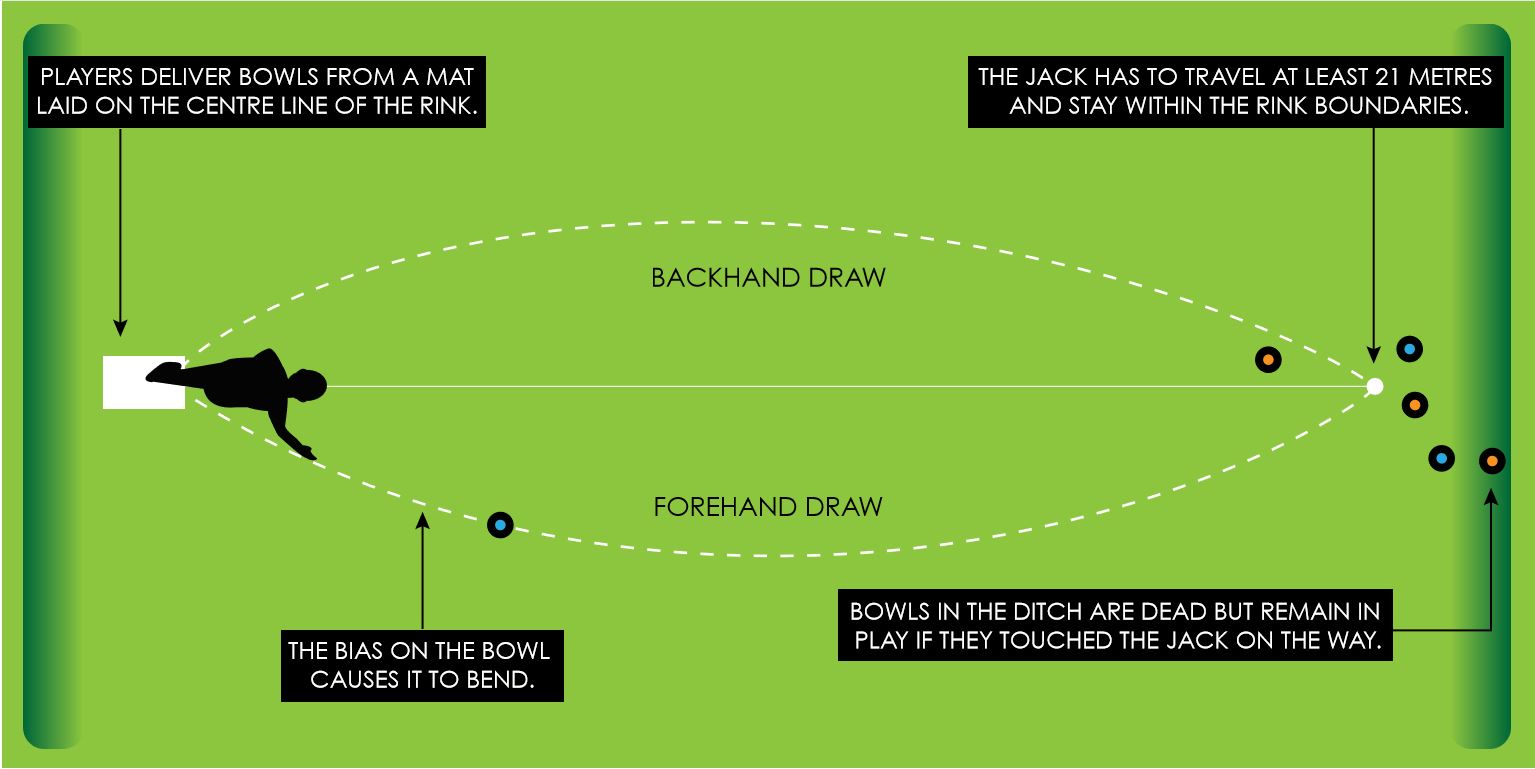 To start, the first player lays the mat and, standing on it, rolls the jack to the required distance up the green where it is centered on the rink by the skip. The player then rolls the first bowl, which is followed by one played by the opposition until all the bowls are played. When the last bowl of the end has been played, the players decide who has the shot and how many and enter the number on the scorecard. They then begin the next end, the player whose side won the previous end going first. The game continues in this manner until the required number of ends, or the required number of shots in a singles game, have been reached.

The most common games are:

Singles — one player against another, each using four bowls played alternatively.

Pairs — a team of two against two, each player using two, three or four bowls, each player alternating against an opposing team player. The names of the two players on a pairs team are lead and skip.

Triples — a team of three against three, each playing two or three bowls alternately against an opposing team player.  Names of the players are lead, third (or vice-skip) and skip.

Fours — a team of four against four, each player using two bowls alternately against an opposing team player. The names of the players are lead second, third (or vice-skip) and skip.

There is also a variety of ‘games’ utilized by coaches and clubs to help develop skills and to improvise play to accommodate the number of players and to add variation to the game. A few examples are ‘Target Bowls’, ‘Jack Target’, ‘Cut Throat’, and ‘Australian Pairs’.

The skills of the sport are best learned under the direction of a NCCP trained Club Coach. Most clubs offer beginner lessons to all new members.